When my water ran out, my landlord told me to keep the taps on as there would be a period that the air would have to bleed out once the PA released the next allotment. After the second day without water, I kept imagining that I heard the water flowing from the taps, and in a dream that night, I had all three of my children running around and filling up containers with water. I was so disappointed when I woke and there was still no water. But, alas, when I came home from work that day, it was running again! I don’t think I have ever had as great an appreciation for water.

Work has been good. I’m pulling up and reading a lot of cases on universal jurisdiction and have connected with a friend who has done a huge amount of work on a case against Chiquita Banana by a whole class of Colombian residents for redress against Chiquita for funding a paramilitary group responsible for deaths of family members. I’m hoping that he can steer me in the right direction. This is some pretty dense and heady stuff for a little ol’ elder law attorney like me.

I had previously posted some pictures of Hebron Rehabilitation Committee’s main office. The legal office is across the street. Today was the first day I did not get lost getting there. I was so embarrassed having to ask for directions again yesterday that I finally drew myself a map. A dear Palestinian woman named Laila (I will definitely get a picture of her for this blog if she allows it) has been my guardian angel in this regard, and helped me get a rid of a man who was just a little bit too helpful as I was making my way to the office.

This is a picture of my office. I love the aesthetic of this architecture and HRC has done a fabulous job of restoring a lot of it. It truly is a  pleasure to walk through these ancient streets every day. The featured picture, btw is through the window of the office. The one thing that takes a little getting used to, however, are the stand up toilets. I must say, though, the squats and lunges I’ve recently done at Group Power  were good preparation (My Y friends will appreciate this).

Yesterday, there was a lot of ruckus outside the office. Bear in mind that it directly abuts the section of the Old City that the settlers have taken over. Well apparently every Saturday (Sabbath) and Jewish Holidays, the military ups it presence and Jewish visitors and settlers parade through the remaining parts of the old city left open to Palestinians. I wanted to snap some pictures, but I’m always afraid some soldier will come and knock my phone out of my hand and smash it. The fear is probably unfounded and hopefully I’ll get over it.

I felt huge indignity at the sight of these Jewish people proudly parading through, flanked every which way by heavily armed Israeli soldiers seemingly flaunting the fact that they could be there while Palestinians could no longer be on the streets that they had recently inhabited; visiting Jews and Jewish settlers stemming from the Bronx who have displaced families and businesses which have been there for centuries. Oh, and I musn’t forget the visiting Zionist Christians who support all of this because of their view that all of Israel must be returned to Jews in order to fulfill the prophecy of Armaggedon; never mind that in that prophecy all the Jews who don’t convert to Christianity will go straight to hell.

What I did get some pictures of is graffiti on the separation wall (aka apartheid wall) near the check point form Bethlehem to Jerusalem.

Probably the most famous separation wall artist is Banksy, a somewhat mysterious pseudonymous character whose real identity is apparently unknown.

This is probably the most iconic, (reproduction, I believe) and there is now a whole Banksy shop at the check point. http://www.whatsinbethlehem.com/banksyshop.html

A shot of the wall at the checkpoint. 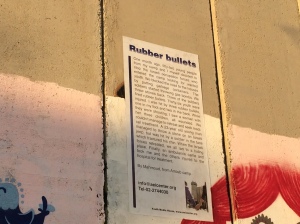 Also on the wall at the checkpoint were several placards like this commemorating Palestinians who had been injured by IDF forces.

Serendipitously, or perhaps just a day in the life of occupied West Bank, while at the check point, I happened upon a whole group of young men with face masks and big chunks of stones in their hands. Just like in Hebron, things were tense yesterday, apparently also because of the Jewish holidays and the consequent increased military presence. Once again, I failed to snap a shot because I felt a tad intimidated. As intimidating as boys with stones are, they don’t pack nearly the punch that boys and girls in full military gear toting AK-47s do. As to stone throwing, here’s a great article on the social-psychology of that phenomenon.

Excerpt: Throwing stones is the birthright and duty of anyone subject to foreign rule. Throwing stones is an action as well as a metaphor of resistance. Persecution of stone-throwers, including 8-year-old children, is an inseparable part − though it’s not always spelled out − of the job requirements of the foreign ruler, no less than shooting, torture, land theft, restrictions on movement, and the unequal distribution of water sources.