“Who are we that we should bewail their mighty hatred of us? For eight years they have been sitting in refugee camps in Gaza and before their eyes we have been transforming the lands and villages where their fathers dwelt, into our estate.”

I think I’ve overused the word irony in these pages, but it abounds like kudzu in modern day Israel. The most obvious and glaring is the abuse and subjugation of Palestinians by Jews, who themselves have historically been  abused and subjugated.  Is it not doubly ironic that the founders of Israel recognized this? The quote above is from Moshe Dayan, words he spoke at a funeral of an Israeli man in 1956 who was killed by a Palestinian in Gaza. 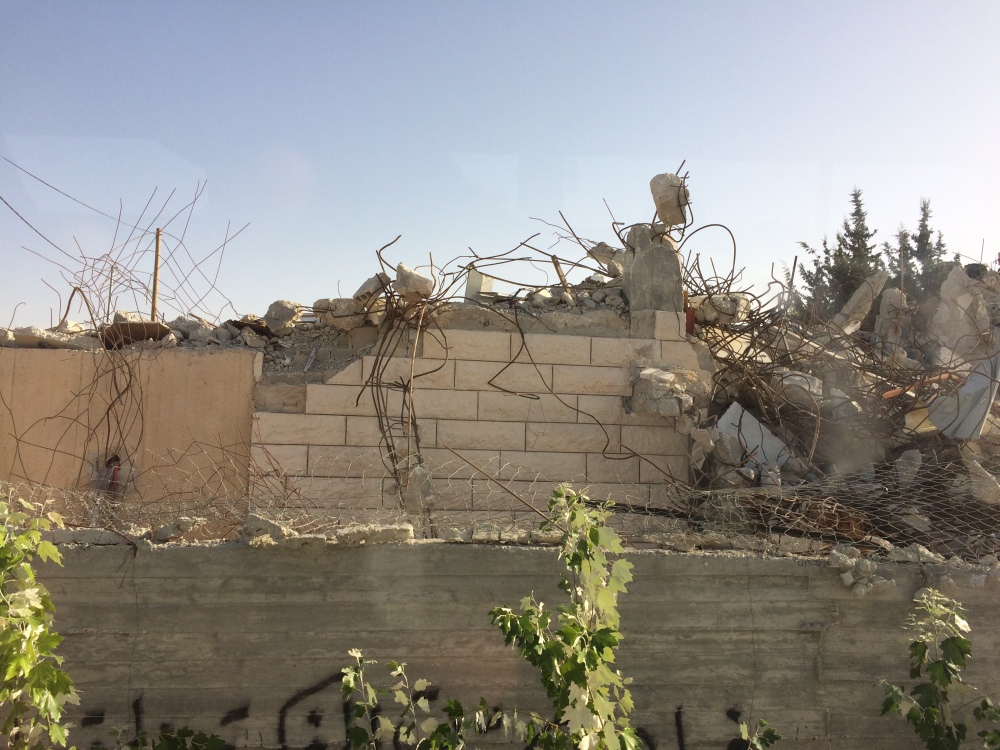 This photo is from my recent trip. The house was recently destroyed by Israeli forces, ostensibly because the Palestinian family lacked a building permit.  Virtually the only places that Palestinians are allowed to build are in the already very cramped, urbanized centers in the West Bank. The majority of the West Bank is off limits to new building. This makes it extremely difficult for Palestinians to obtain new housing. To add poisonous salt to festering wounds, these demolitions are often undertaken at the point that a new home is almost completed.

Speaking once again of irony, this particular house was in the vicinity of an Israeli settlement in the West Bank. These Jewish only settlements defy international law and multiple UN resolutions condemning them. The West Bank is an occupied territory, and the law is very clear that the occupied population (the Palestinians) are not to be displaced by the occupying power.  Yet after 50 years of occupation, there are now over 500,000 Jewish settlers in the West Bank, huge swaths of land have been confiscated and thousands of Palestinian homes destroyed leaving only a fraction of the West Bank in Palestinian hands. Even during the Oslo accords, new settlements were being planned and erected.  And what remains in Palestinian hands is still fully under Israeli military control as well as all of the resources (see earlier posts about water rights and movement). Is it any wonder that the rage festers?

50 years of occupation: displacement and dispossession in Palestine

3 thoughts on “Can the Hatred be Contained?”