I need to dedicate a couple posts to some of the other lovely people I chanced to meet during my month in the West Bank. Hijazi is a Palestinian guide whose specialty is walking tours of the West Bank. My group last year had done a day trip with Hijazi, but he often takes groups on tours of a week or more, with overnights in a variety of places, including hotels, Palestinian families and in Bedouin camps. He lives with his family in a village near Bethlehem, but he keeps an apartment in Bethlehem to accommodate guests. This was the apartment I rented for my month in Bethlehem. As my previous posts have indicated, I did a tremendous amount of walking in Bethlehem and Hebron, often getting lost in the process, but always discovering new and interesting things. Walking really can’t be beat when it comes to becoming intimately familiar with a place. If you should have the good fortune of travel to the West Bank, and if you want to experience the beauty and serenity of some of its most beautiful, natural spots (or the history of the cities and villages for that matter), I couldn’t imagine a better guide. https://hijazih.wordpress.com/ He will be able to take you and give you all the information you need and to make sure you are well fed and housed along the way. Part of the deal in my renting the apartment was that there would be a few nights in which I would be sharing it with some of Hijazi’s guests which turned out to be an added perk for me.

The first group came from Grenoble France. Pascale, Marie, Pierre and Joel were returnees to the West Bank and big proponents of Palestinian rights. They had not only toured previously with Hijazi, but he had spent some time visiting them in France. They were such good sports, struggling with English to accommodate my complete lack of French. They were there for a couple of evenings, and I felt a little lonely when they left. We exchanged contact info and I chalked it up to one of those “hope our paths will cross again” encounters. Well, our paths crossed again much sooner than any of us expected.

When I was in Jerusalem on my last Saturday before going home to meet with the lawyer from Diakonia, I spent some time after the meeting getting lunch and then wandering around East Jerusalem to enjoy the sights. I had written earlier about finding some quietude in Lutheran Church of the Redeemer. After I left and was trying to orient myself toward the bus station, I was walking past an outdoor café and out of the corner of my eye, I saw a person I recognized. On second glance, to my complete surprise and delight, I realized it was Pascale. They had left the apartment in Bethlehem a couple of nights earlier, and here they were sitting in Jerusalem, the day before departing back home to France. We all had a huge laugh over the complete coincidence of my running into them so randomly. Somehow, I failed to snap a picture of them, but Marie shared this with me.

The second set of guests was a group from Wales and England, Janet, Paul and Monica.

They only spent one night at the apartment, but we had a fun time scouting town for beer and good eats (a break from my routinely uninspired cooking for one) on the evening of their stay and I got to tag along with them the next day for a hike to Wadi Qelt and for a float in the Dead Sea. The extra perk here was that Paul is the most accomplished birder I have ever met apart from my brother-in-law, Dan Peak. I have a sneaking suspicious their paths will cross one day. Although I was inited to tag along on a couple of hikes, this was the only one I managed because I was so busy with work in Hebron.

Wadi Qelt (Wadi means valley which is an understatement here as it is an enormously, deep gorge) is itself a worthy destination for a hike in its magnificent natural beauty. But, it is also the location of the St. George’s Monastery nestled into the cliffs about halfway down the gorge. 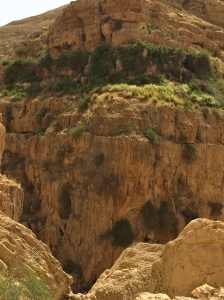 A cave down in the gorge. This area is full of caves and they were inhabited by monks through the centuries who were hiding from their persecutors.

These two pictures are looking down on the easy approach to the monastery that starts from a parking lot.  The ant-like size of the people gives perspective of how deep the gorge is. 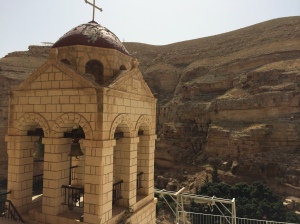 A couple views of the monastery from on the premises.

Looking out a window from inside the monastery 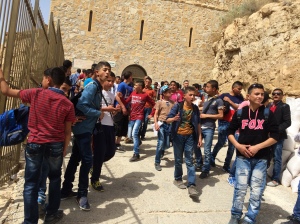 We had to crawl through this little door to get into the monastery. As we were leaving, this group was trying to get in.  They did give us berth to leave. Good thing, because it was quite a huge group. 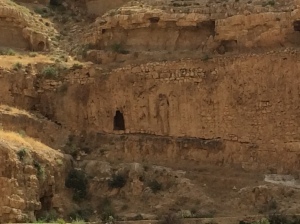 Beautiful views along the way as we were walking toward Jericho 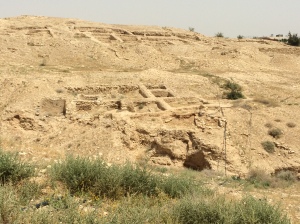 The remains of one of Herod’s palaces 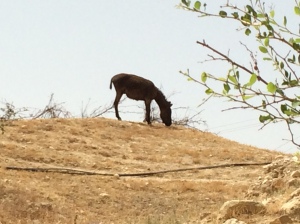 Both groups, the Brits and the Francos, were here because of a shared passion for Palestine. It is really good to know that so many people are taking the initiative to try to spread awareness of the reality of the occupation. Israel is a country of remarkable accomplishments and has much to be admired, but  its 48 year old occupation and domination of some 5 million Palestinians is a downward drag. Until it reckons with this, it will never be secure and it is quickly gaining the status in the world of a pariah state. Yes, there are some Palestinian terrorists.  When you consider that a 14 year old in Gaza has experienced 3 full-scale, devastating, infrastructure-obliterating,  inescapable wars, is it any wonder? In spite of this, the overwhelming majority of Palestinians simply want the freedom to live normal lives and support and educate their families.

4 thoughts on “HIKES AND KINDRED SPIRITS”