But Someone was Already There

There is a great little Thanksgiving Diddy that my children used to sing, recognizing that Columbus wasn’t the first person to “discover” America. Rather, people had been living there for thousands of years.  One verse goes as such:

Followed by the chorus reciting a list of many of the American Indian tribes.  If you want to hear the whole song, it’s here

It  has only been in recent years that Americans have started reckoning with the historic whitewashing of how the Indians were decimated by the hordes of explorers and colonizers that followed Columbus. One would hope that mankind had evolved enough over the past few centuries to recognize that the destruction and subjugation of an entire population in the interest of colonization is immoral. But, that is exactly how the state of Israel came into being and continues to expand.

Just as we Americans were raised with the notion that America was built by heroes and that the only bloodshed of the native population was because their own savagery, so goes the narrative about Palestinians who predated the modern State of Israel. Contrary to oft repeated Zionist equivocation that Israel was a land without people for a people without land,  the Zionist narrative has whitewashed the tragedy of the expulsion of 100s of millions of Palestinians from their generational homes, the destruction of hundreds of villages and the appropriation of Palestinian culture.

Another oft heard justification for the creation of Israel relies on the the pride of the the accomplishment of the creation of modern day Israel with its booming economy and mighty military. It is true that Israel is a beautiful and thriving country. It’s hard to travel there and not appreciate this. It’s ironic, however, that much of the culture that Israel celebrates including music and art, has been misappropriated from Palestinian culture. When one acknowledges how the Palestinians have suffered and continue to suffer as a consequence of the creation and expansion of Israel, it greatly tarnishes Israel’s image. Most people on both sides of the issue acknowledge today that there will never be a two state solution. Gaza and the West Bank are no longer connected, and what remains of the West Bank for Palestinians are the Swiss cheese holes in what had been designated as Palestinian land by the original UN mandate. So, it is with mixed feelings of nostalgia and deep sadness that I share these last pictures from the olive picking trip of Fall of 2017.

These two pictures were taken during our tour of the Palestinian quarter of the old city of Jerusalem. The second graphically demonstrates how Zionist Jews are attempting to claim the whole city as their own. Even though the buildings from which the Israeli flags are hanging are unoccupied, somehow the rights to the buildings are owned now by Jews and the message is clear. We belong here – not you. Of course, Donald Trump’s recognition of Jerusalem as the capital of Israel will only further serve to bolster these claims.

We parted from the group in Jerusalem where we spent the night and then left the next morning for Jaffa. Jaffa is the ancient city that eventually was swallowed up by modern day Tel Aviv, the largest city in Israel, and the logical location of its capital. We stayed in the old city where there remains many vestiges of the old Palestinian presence as well as some remnants of New Testament Biblical times. 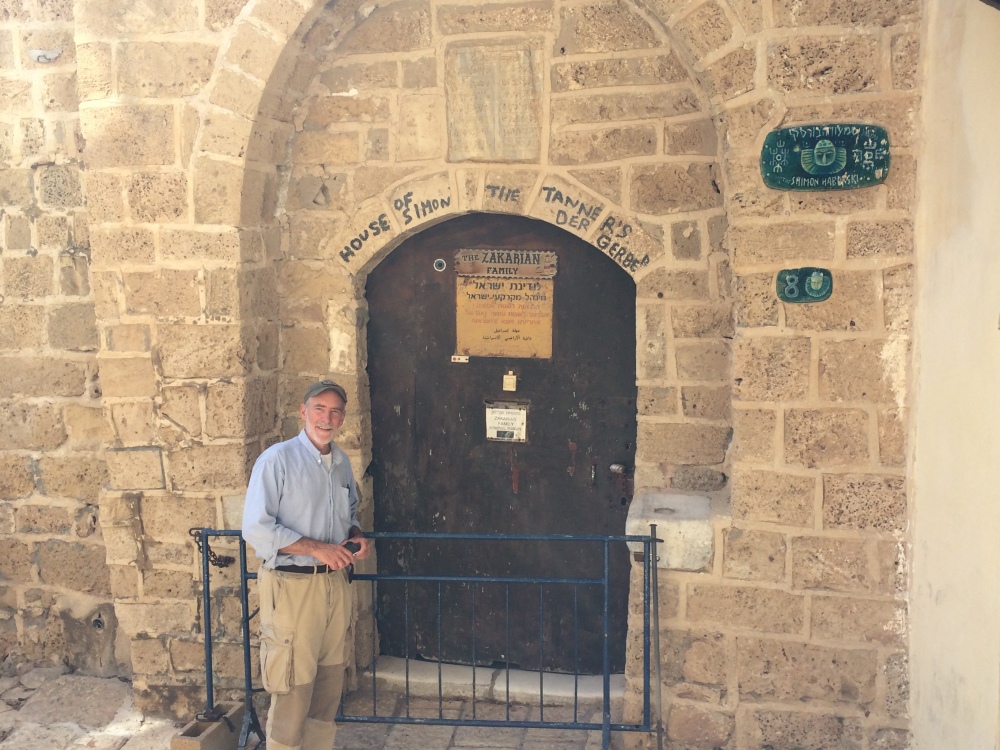 The historical site of the house of Simon, the fisher. 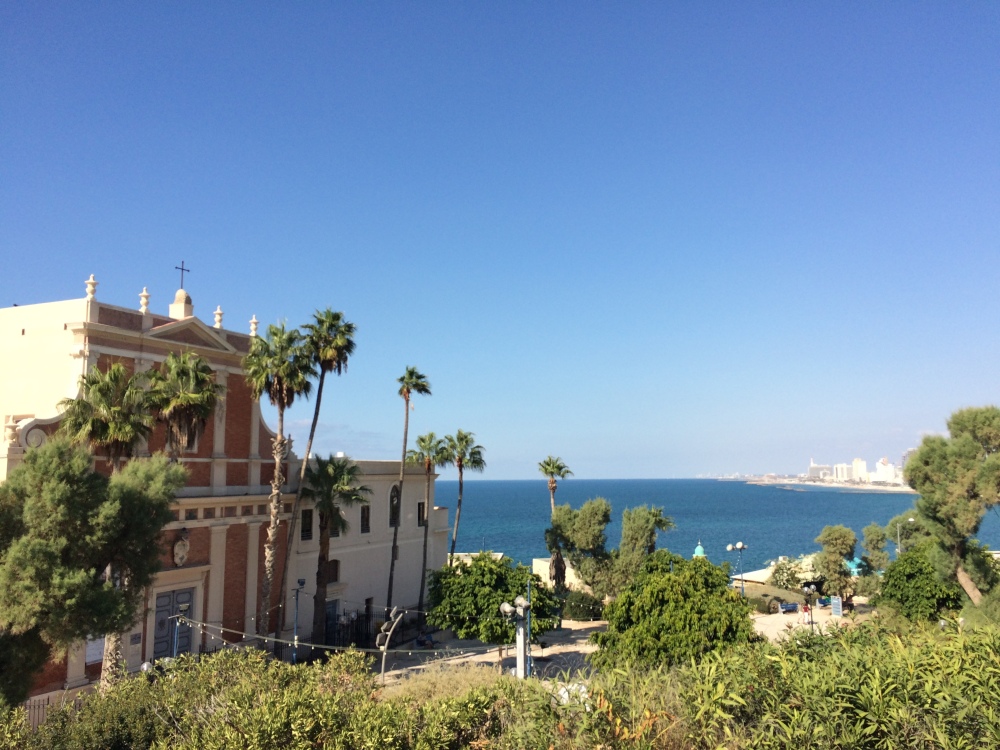 Spectacular view from old Jaffa to the Mediterranean Sea – something that many Palestinians living  in the West Bank, only some 30 miles or so away, will never in their lifetimes see.

My third time eating on the edge of the port of Jaffa at the Old Man and the Sea. No matter what one orders, the meal starts out with this huge display of salads and a large pitcher of fresh lemonade.  It’s an extremely popular restaurant staffed primarily by Palestinians and serving traditional Palestinian foods, but many travel sites tout it as Israeli. The fact is, the cultures are both Semitic and very similar, but this is something that Zionists wish to erase from consciousness.  Of the 48,000 residents of Jaffa, around 1/4 are Palestinian.

One thought on “But Someone was Already There”