During this  picking venture, I had the chance to meet up with some friends from my past two visits. After one morning of work, our group toured the old city of Hebron, where I had spent a month working in 2015. I had written about Leila, a lady in the market. She had become my friend after she  kindly guided me through the confusing narrow streets my first week there. https://kksjournal.com/2015/04/19/dont-you-know-its-dangerous-there-said-the-fox-to-the-chicken/  We initially visited the al Abrahimi Mosque, which was infamously partitioned to create a temple for the 500 or so squatting settlers who had turned this ancient Palestinian city upside after one of their minions, an American, Baruch Goldstein  machine gunned down 30 or so worshippers. Mind you, this had been exclusively an Islamic place of worship for over 800 years.

In one of the more bizarre twists of the stilted history of the occupation, this flagrant act of violence of a crazy Zionist against the indigineuos inhabitants, rather than drawing protection from Israel, the occupying force for the native inhabitants, did the exact opposite. Shuheida  Street, the Main Street  of commerce in the old city  was closed down, Palestinian businesses were shuttered, Israeli forces were called in, not to protect the Palestinians, but rather the squatters, outnumbering them  by four soldiers to every squatter, and erecting check points severely restricting movement of the inhabitants of the old city.   The injustice of this is so profound, it pains me to recount it. But yet I’m compelled to,  because the pain resides daily in the lives of those Hebronites who remain, struggling to maintain subsistence and a semblance of dignity in the face of such oppression.

I ran ahead of the group afraid that I’d miss the opportunity before our bus was to leave. As I ran through the narrow street, a couple venders shouted out to me to stop and look at their wares. One shouted, “I remember you!” Others cried out to stop at their shops. I replied, “Leila, I’m looking for Leila.” I heard one scoff, “Leila, always Leila.”  Finally, there she was, pretty much at the end of all the venders. Such a sweet reunion. It’s strange how certain interpersonal connections are made. Is it cosmic, in the DNA, the stars?  All I know is that it was instantly and mutually felt. Leila looked much the same, but life had not become any easier. She told me that her son had been arrested two days earlier for having “illegally” sought work in Israel. This, of course could mean six months in jail with no outside contact with the world, abuse/torture, and imposition of impossible fines. it’s hard, so very hard to feel so useless and impotent.  A very bitter sweet and shirt reunion.

I was also very interested to know what become of Feryal  Abu Haikal. FOLLOW THE TEL RUMEIDA ROAD. When I enquired, all I learned was that she had taken ill. Hardly a surprise given the immense pressure she faces on a daily basis. In Googling I further learned that she had lost her case against the continued destruction and confiscation of her land  in the Israel Supreme Court.   Losses continue to mount The pillage  of the ancestral land of the Abu Haikal family continues under the auspices of archeology, but as one Israeli archeologist pointed out in disgust, who ever heard of an archeological dig being conducted with backhoes? Moreover, ancient finds from the Roman times are found and destroyed only to dig deeper. The only thing of interest in this farcical Zionist venture is to find artifacts dating to the time of King David’s mythical reign to bolster the claim that this is the rightfully seized land of Israel.

On a more positive note,  I was able to meet up with my friend and hiking guide Hijazi Eid who joined us for dinner at the hotel. He also does his part and teaching of the beauty and history of the ancient land of Palestine and its deep shared culture among Jewish, Christian and Islamic peoples. 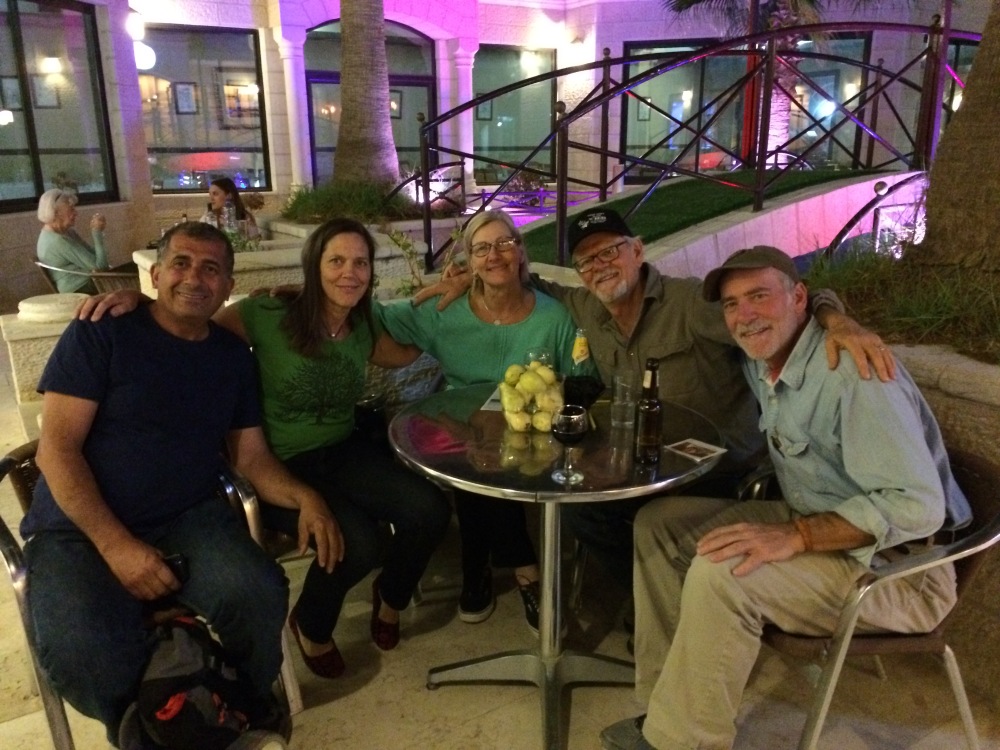 We also were able to spent  one night with Mirvate Anwar in Beit Sahour. I stayed with them during my first trip, and have kept contact with her ever since. They have a beautiful house which keeps getting taller to accommodate their growing family. Palestinians are very rarely allowed building permits by the Israeli government  so their only option to expand is upwards. This is why one often sees rebar sticking out from the top of Palestinian houses.

Payne and I also had a chance meeting with her lovely daughter, Natalie as we were wandering the streets of Beit Sahour on our one free day. She was working in a tourist center when we were looking for an ATM. Unfortunately, I didn’t get photos.

The struggle continues, but more and more people are becoming aware and adding to the force for change. Israel has become Goliath and the Palestinians David. Justice will prevail.