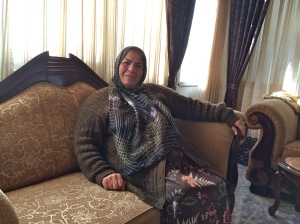 I can’t remember anymore who told me about Ferykal Abu Haikal, but she was high on my bucket list of people I wanted to meet during this trip. After my encounter with the soldier at the check point and my walk up desolate Shurada Street, I really didn’t know where I was going. Along the way a saw a couple of settlers. They look so very out of place, and maybe it was just my bias, but they looked steely, unfriendly and unapproachable. I need to check that way of thinking. It’s those biases that have made the situation here as impossibly entrenched as it is. That said, they do have a  well documented reputation in Hebron for hostile, despicable behavior toward the Palestinians around whom the have chosen to live.

Along the way, I ran into a group of EAPII volunteers, and one of them had been at my first day’s orientation meeting at HRC. They are one of the many groups here to monitor the situation, and one of their major functions is accompanying Palestinians to and from school where they are constantly harassed and attacked by settlers. After a quick chat, they pointed me in the direction of Tel Rumeida. When I came to a cross road, a rather puzzled looking soldier directed me to the left. The street was very quiet, and there was something a little eery and unsettling about it. This is a place where both settlers and Palestinians co-exist, in a manner of speaking.

I encountered a Palestinian boy and asked him where Feryal lived. He pointed me in the direction of her home at the very top of the hill and walked with me a ways, ultimately pulling some Palestinian souvenir trinkets out of his pocket to hawk. I gave him 4 shekels for a plastic bracelet emblazoned with the Palestinian flag and he was on his way. I rang the bell at a house and a young woman answered and when I asked for Feryal, she pointed me to the next house. I rang that bell and waited a minute or two hoping that my climb was not not going to be for naught. Well, in actuality, nothing here is for naught. Every step I have taken on this trip has led to something interesting. One thing is for certain; it has made me a huge fan of walking.

At the top of the building I heard a door open and there stood Feryal with a slightly furrowed brow, no doubt wondering who this unannounced stranger standing at her door stop was. As a Palestinian, she is no stranger to unannounced and often unwelcome knocks at the door. I briefly introduced myself and explained my mission and she waved me up. Her front door was unlocked and I climbed the stairs where she greeted me and took me to her beautiful living room. 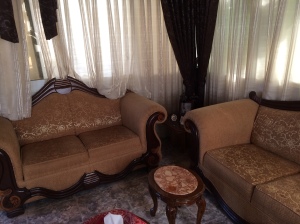 I’ve noticed that although many Palestinian homes are very plain on the outside, they are often lavish and very welcoming on the inside. When we sat down, I explained in a little more detail what I was doing in Hebron and why I came to see her, and then I mainly listened as she recounted some of her stories. She was quite apologetic about her English, but believe me, it was more than adequate to this end.

Feryal’s house, as explained is at the top of the hill in Tel Rumeida. 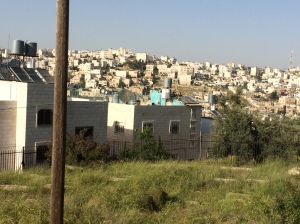 Its location has two strikes against it in the Israeli/settler/occupation scheme of things: it is in the part that is occupied by  Jewish settlers and it is on top of an area that Israel has designated as an archaeological site. Excavations have already begun next to her house to build a “Bible Park.” 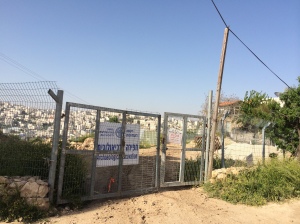 She said that they are digging to the bedrock in attempt to unearth remnants of ancient Jewish civilization. In the process, they are destroying more recent, but significant non-Jewish layers of history, including a hundreds year old Muslim cemetery which was brazenly desecrated. Archaeology is one of Israel’s 1984-ish terms which has been turned on its head. In reality, it is used throughout Israel as a means of erasing Palestinian history in attempt to prove to the world that Jews were the only presence in this part of the world. This is currently happening on a wide scale in East Jerusalem where Palestinian homes are being bull dozed en masse for creation of a massive “King David Park” a Zionist Disney World. 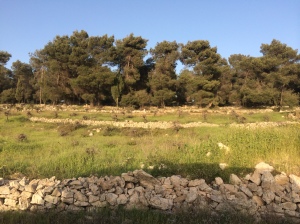 Another example of this is the planting of groves of pine trees in the countryside to European-ize the landscape and in many cases, hide the remnants of ethnically cleansed Palestinian villages. That foolish practice has not only led to the decimation of the beautiful, natural landscape, but also some massive forest fires because pine trees are like tinder in this dry climate.

Feryal and I chatted for close to two hours.  You can read a little Wiki blurb here about how the occupation/settler movement forced the Haikal family off the land they had farmed for decades. And here is a video of her talking about Tel Rumeida. https://www.youtube.com/watch?v=xf6PuLYzPZ0  (There are others of her on Youtube, as well)

She told me about how the curfews during the 2nd intifada interfered with schooling. If a curfew was on, that meant not leaving the house, and even when curfews were lifted, schools were off limits for a significant period of time. Feryal defied this by holding class outside in the parks. At one point, when a curfew was lifted, she called everyone to school. She was then confronted by a soldier who yelled at her that it was only lifted to allow people to shop for food. Feryal is a master of non-violent resistance.

In 1995, when they were finally able to officially reopen the school, she planted a Palestinian flag on it. It wasn’t long before a settler snatched it and burnt it. No matter, Feryal had two more at the ready. She took the children, flag in hand and marched them through the street to show the soldiers and the settlers that they were not defeated. A settler grabbed the flag from her and started beating children with it.   With resolve they continued, and at the school, she planted her third flag.

I had recounted in an earlier post how Baruch Goldstein murdered the Muslims praying the synagogue. He was tackled and beaten to death only after he killed 27 people. But, that wasn’t the end of people like him in Hebron. Baruch Marzel is another radical member of the Kach organization  http://en.wikipedia.org/wiki/Baruch_Marzel  and is behind a lot of the violence in Hebron. He once angrily confronted Haryel and told her, “every dog has its day.” She nodded her head and looked him straight in the eyes and said, “yes, he does.”

She told another story of how an Israeli worker came to her house asking for ingress through her land in connection with the excavation they were doing. She told him to come back the next day and she would have the entrance ready. After he left, she erected a barricade. When he returned the next day and saw that he couldn’t get in, he said, “I thought you were going to have it ready.” She replied, “Yes, it’s ready.” She laughed and told me that he told her that she should have been a lawyer. And then explained that she knew from experience that if she had allowed him in this “one time” she would never see the end of it.

Israel is trying very hard to confiscate two lots that directly abut her home. Her family has rented them for over 65 years from the Islamic Waqf. There is a case currently pending in the Israeli Supreme Court. She hopes for justice, but it is a rare thing for Palestinians. God knows what will become of her home if those lots are seized. 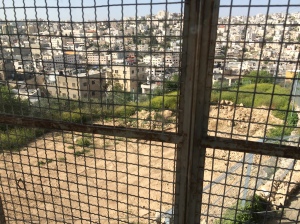 Here is a view out of her living room of the land in jeopardy.

She is very proud of her children and the fact that they have all managed to stay out of trouble – no small task in a land where nearly every family has or has had boys or men held in Israeli prisons, often in “administrative detention” which can be as long as six months at a time with no charges filed, and no access to the secret files. When we discussed this, I mentioned a friend whose son-in-law is currently on his second consecutive four month administrative detention, without charges, because of his advocacy on behalf of Palestinian political prisoners, and how he has a baby he has never met. It made Feryal weep. I felt bad, but then again, weeping is probably the healthiest response to the situation.

She told me how she was named Palestnian Person of the Year in 1996 and how she was nominated in 2005  by the Peace Women Project as one of  1,000 Women nominated for the Nobel Peace Prize that year. And she was also very proud to recount how Yassar Arafat had come to meet and congratulate her.

Probably the most notable thing about Feryal is her passion for education. As mentioned, this is her life’s work, but it is also reflected in her 11 children, six of whom are engineers. Girls or boys, it does not matter. Education is paramount in Feryal’s mind. One of her sons is finishing his PhD in engineering at M.I.T. this spring. We were amused by the fact that her son will be leaving M.I.T. just as mine is starting his post-doc work there.

These are just a few of Feryal’s stories. She has toured the U.S extensively and you can watch her on YouTube. Feryal is testament to the Palestinian spirit which is alive and well and will not be put down. I feel very honored to have made her acquaintance. 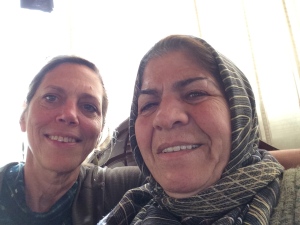 (I think I’ve finally gotten the hang of selfies – hehe).