One of the things that impressed on me indelibly were the faces of the many, many Palestinian children I saw during my stay there. I am an amateur photographer who has a little bit of an eye for a good shot,but beyond that, no skill and I am also impeded by an intrinsic shyness that makes me ever aware that my pointing a camera might offend. In spite of my shortcomings, I managed to get a few shots of children who captivated me for a moment – albeit blurry and probably not well framed. My goal in posting this, however, is to underscore the beautiful resilience and optimism of the Palestinian people in the face of decades of oppression.  Oh yes, the Palestinians have a much higher birth rate than their occupiers, much to the consternation of the latter. I had a Jewish friend who argued that the conflict between Israel and the Palestinians would not be so entrenched if the Palestinians didn’t “breed like rabbits.” Her point was that the refugee camps stemming from those who were expelled from their homes and villages in the mid-1900s have only exacerbated the problem by continuing to reproduce. Oh, and that was punctuated by her contention that the neighboring Arab countries should have given them homes; never mind the fact that they did to the tune of refugee camps in Syria holding some 500,000 Palestinian refugees, roughly the same number in Lebanon and a whopping 2 million plus in Jordan. But, those naughty, naughty Palestinians kept just popping out babies. This idea has become entrenched in an alarming trend of racism in Israel.  An Israeli politician recently referred to Palestinian children as “little snakes” in a blood curdling diatribe.   http://www.thedailybeast.com/articles/2014/07/07/israeli-politician-declares-war-on-the-palestinian-people.html

Well, I’ve already posted some pictures of beautiful Palestinian baby bunnies. The grandnieces  of my dear friend Hiam in Aboud totally enamored me (see my post Everyone Has a Story), but every time I walked the streets and backroads of Hebron, Bethlehem and the surround, I saw so many more beautiful, bright, happy, optimistic children, and these are the lucky ones. My heart breaks thinking of the children of Gaza.  A 14 year old there has witnessed 3 major assaults, financed in large part by Uncle Sam,  and is now living in a desolate, bombed out area(beyond the imagination of any of us Americans), whose reconstruction is impeded by Israeli occupation, apartheid policies (all in the name of their own, 1st world, high living standard security of course). By the way, of the 2.3 million Gazans, approximately 43% are children.  Does it take a brain scientist to surmise that this relentless bombardment and devastation of Gaza is going to impact these young minds in a negative manner? Is it any wonder that terrorists are born of this sort of strategy?

God save the children. So many beautiful children who are just getting by in the West Bank and who are totally traumatized in Gaza.  God bless them and save them from futures of violence and retribution. I am afraid, however, that this will only come to pass if the world recognizes that Israel must be condemned for its callous disregard for their human rights and its misguided perception that it can gain security with sheer military might. Fortunately, much of the world has already done so, but the US is the last bastion of unilateral support of Israel, and carries the largest coffers. It really rests, therefore, on our shoulders as US citizens to say, “enough.” End the occupation, end the oppression – yes, Israel we have your backs, but only if you do as South Africa did and embrace truth and reconciliation over the decades of wrongs you have done to the Palestinians. 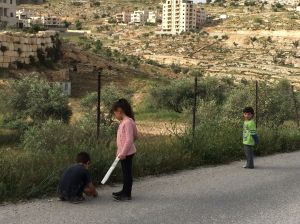 Both of these are shots from the walk up the hill to my apartment. I loved this little street. It was very much in the city, but had the lovely country landscape where children were free to roam and play freely, sort of like kids did when I was a kid. 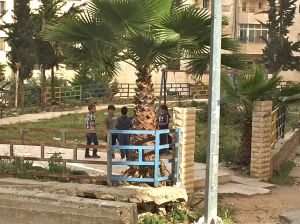 This was the little playground in the center of the apartment complex where I lived in Bethlehem.

This beautiful little child was sitting in the seat in front of me on my bus ride into Jerusalem.

Children in the old city of Hebron near the Hebron Rehabilitation Committee where I worked. 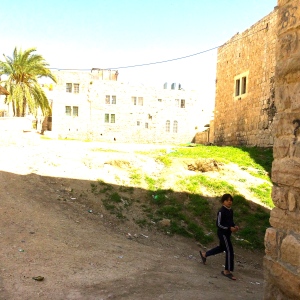 Although there was always some trepidation in the eyes of these children who already faced many abuses at the hands of the radical Jewish settlers and soldiers protecting them, once they knew you were friendly, they were usually all smiles. 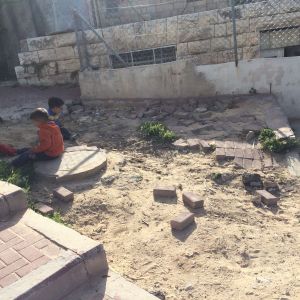 This was at the excavation site near the home of Feryal Abu Haikal whom I wrote about in an earlier post whose home and family land is under threat of confiscation under the ruse of an archaelogical dig and upcoming Jewish biblical theme park.

2 thoughts on “It’s the children, stupid!”