My backyard in Bethlehem is amazing. Every day I gaze  out onto the beautiful ancient landscape, and I have been greeted by some heart stopping sunrises and moonscapes. Yesterday, I awoke to this sunrise.

I also continue to be delighted by the bucolic sight of animals, not only grazing in the stony fields, but sometimes being herded up the street. 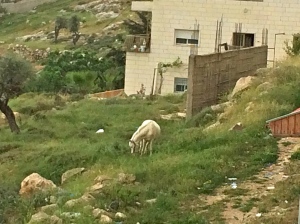 This guy appeared in my backyard just this morning.

And this little scene was just up the street from me yesterday morning as I was walking to the bus station. 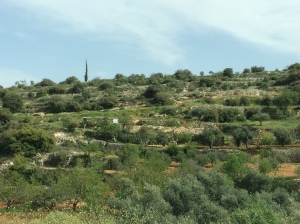 This is a typical country landscape in Palestine: hills that have been meticulously terraced over hundreds and hundreds of years in a very planned design to allow for an even flow of rain water so as to optimize agriculture on the craggy, stony hills.

Unfortunately, the landscape has been scarred by the many illegal settlements erected in the West Bank. After Israel’s capture of the West Bank and Gaza in the 6-day war of 1967, contrary to all protocols of international law, Israel started building Jewish only settlements in those lands, destroying homes, displacing many indigenous residents, chopping up ancient farmlands and villages and seriously impeding any chances of peace. To date, there are now over 500,000 Jewish settlers in the West Bank. 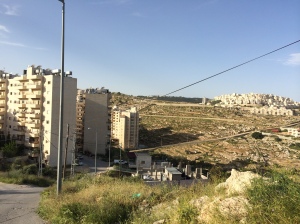 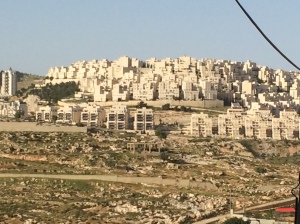 This one looms over the apartment complex in which I reside. Happily for me, I am deep enough in the valley so that I don’t have to look at it from my apartment. That is not true for many Palestinians. The family that hosted my home-stay last May lives in Beit Sahour just outside of Bethlehem. The entire landscape outside of their home’s veranda is the ever expanding settlement of Har Homa. http://electronicintifada.net/content/beit-sahour-microcosm-israeli-colonization/8790

The settlements are always placed on top of hills, encircling Palestinian villages where they mockingly loom and constantly remind Palestinians of how their land and heritage is slowly being eaten away.

The term settlers is an a euphemism.  In my opinion, squatters would be more appropriate, reflecting the illegality. That said, these so-called settlements are huge, resembling sprawling suburbs.  This article from Amnesty International discusses the issue of house demolitions and displacement in detail. https://www.amnesty.org/en/articles/news/2011/12/record-number-palestinians-displaced-demolitions-quartet-continues-talk/

If the land confiscation for settlements wasn’t injury enough, Israel has also seized huge swathes of land to construct Israel-only roads cutting through the West Bank to allow the settlers “safe passage” to the settlements.  And of course the separation wall, commonly referred to as the Apartheid Wall by those opposed to these practices cuts deeply into the UN designated Palestinian territory.  The road to Hebron is an exception. Because there are also some very large settlements on the hills around Hebron (as well as the extremely controversial small settlement in the old city),  and because Hebron until very recently was almost exclusively Palestinian, this is a road which is shared by both Israelis and Palestinians.

On the turnoff to Bethlehem, however, it once again becomes Palestinian territory. 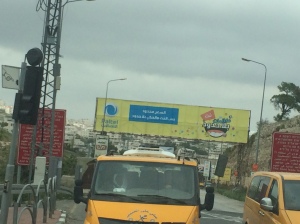 And Israel lets us know in strong terms with these foreboding signs, lest anyone forget how scary and terrifying Palestinians are.  Funny, in my days here so far, I haven’t run into a single scary Palestinian yet. In fact, they are regular people with two eyes and a nose and a mouth, and they have been exceedingly welcoming and friendly. Stoking fear is an age-old mechanism for controlling people.

One thought on “ANIMALS AND APARTHEID”