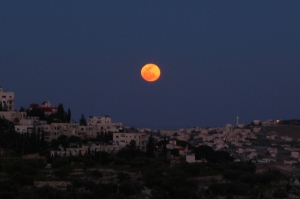 I will start with the Beauty. Last night, Easter Eve, I enjoyed the most amazing moon rise I think I’ve ever experienced. Apparently this was the blood moon. Could it have been more timely? This was taken from the balcony of the apartment where I’m staying in Bethlehem.

And this shot was taken from the same vantage point the other morning, capturing the beautiful sky shortly after sunrise.

The apartment complex is lively, full of children’s voices, barking dogs, roosters crowing and the occasional baaaa of a sheep or goat. This is up the road a bit from the apartment building, along my walk to stores and the old city. 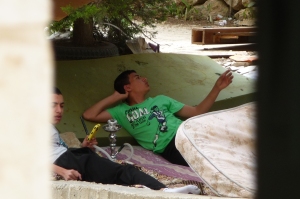 Here is a sneaky shot I took from a window in the apartment.  It’s a little enclosure some young guys had erected with mattresses in the corner of a playground where they shoot the breeze, check their cell phones and smoke sheeshi.

For my fellow Living Waters Pilgrims and Grace Lutheran-ites, I was able to attend Good Friday service at Christmas Lutheran Church and I got there without getting lost! I was worried about not getting enough exercise during my month here. So far, that has turned out to be of little concern as it’s a good 5K walk even when I don’t get lost with a long hill with a seemingly vertical incline coming out of the apartment complex.

There are all sorts of beautiful little spots along the way and a very lively and intriguing market along the way.

It was a well attended service, of which I understood very little as it was all in Arabic (no surprise there), but I knew the general order of the service and to top it off, Bishop Munib Younan was there to deliver the sermon. 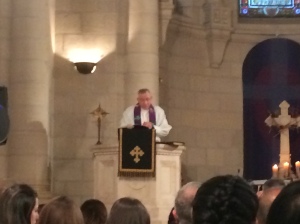 Although I couldn’t follow it, it was interesting to see him in this context. He is quite the dramatic orator. I left a little early as it was getting dark and I was intent on not taking a cab home.

Today, I attended Easter Service. It was a beautiful, sunny morning which made for a very enjoyable walk. I don’t think I mentioned that the walk takes me smack through Nativity Square.

As would be expected on these days, the square was absolutely packed with cars and people.

This service was particularly enjoyable because there was a  service bulletin in English. This picture was before the service as the church was filling. I wanted to get a shot of that little girl with her fancy dress. There were quite a few young girls who were really dolled up.T

he same very talented musicians who participated in the Friday service also led much of the singing this time.  I met the woman in red afterwards. Her name is Ghada and she is Palestinians but was raised in Jordan and eventually married an American. She is here with her husband from Florida working at a Christianschool here in Bethlehem.

This is an upside down shot of the ceiling with a little bit of the organ.  This is the first Easter in at least 20 years that I haven’t played the organ. It felt a little strange.

In true Lutheran form, these Palestinians sang loudly and exuberantly.

I was able to chime in an Alleluia every now and then and sing along on the hymns which were transliterated in the bulletin. I also had jotted down a transliterated version of the Lord’s Prayer, so I was able to sing along with it – in a fashion.  When I flipped to the page in the Arabic hymnal it took me aback to see that they even write their music from right to left. That would take a little getting used to. I guess you could always use a mirror.

After the service, I met Ghada and her husband Jeff and walked over to Mitri’s house where he hosted an after church get-together. This is when I finally got to say “hello” to him and he was able to make the connection with this persistent woman who had been e-mailing him over the past months. I look forward to talking more to him about what I’m doing here later this week.

The walk back was also beautiful. The old city sits atop a large hill. This photo is taken from the edge of Nativity Square.

One of my favorite parts of the walk is a very long stair case in the side of the hill that creates a bit of a short cut from walking the winding road down.  On the way down sits this chicken coop with a tree growing through it. To me it is a sign of how Palestinians love and respect nature.

Here’s another little bit of nostalgia for the Living Waters peeps. I stumbled upon this the other day when I was quite hopelessly lost getting back home from my Serveese drop-off.

So, now for the not so good news. The hot water stopped working a couple of days ago. My hair was so in need of a wash, I finally heated water on the stove, and washed it in the sink – no big deal. But, as of yesterday, I have no water. at all – hot or cold.  When I informed my landlord, he came over and took me up to the roof of the building – it’s 8 stories and no elevators.  Well, actually there are elevators but they’re non-functional because electricity is so expensive. At the top of the building, every apartment has a water tank.  He thought that perhaps the valve had been shut off by a hostile neighbor. Unfortunately for me, that was not the case; the tank was dry. These tanks are filled periodically when the Palestinian Authority releases water. As most of you know, water is a very precious commodity in this part of the world. When your tank runs dry, that’s the end of your home’s water supply until the next allotment comes. He assured me that it would probably be today, but so far, the taps remain are dry. Fortunately there are a lot of bottles filled with water which you can bet I am using very judiciously. I am thankful for my time roughing it at our family camp where similarly, when the pump down by the lake breaks, we have no running water. The difference is, we can go down to the lake to bathe and to draw water. Here there is no such option.

And the kicker is, although a huge portion of Israel’s water comes from aquifers under the West Bank (Palestinian territory), those water resources are fully controlled by Israel. Here are a few sobering (and infuriating) facts and figures. As aptly put in this article http://www.haaretz.com/news/middle-east/1.574554 in the Israeli newspaper, Haaretz: “Israel has adopted a drip-feed approach to providing the Palestinians with water instead of letting them control their own natural resource.”

The result  is that the West Bank is allotted ¼ of the water resources from its own territory as is allotted Israel. And Israel has its own resources on top of that. This leaves the  2.7 million Palestinians living in the West Bank with a huge water shortage and a per capita use of  less than 100 litres per day,the WHO’s minimum standard for health and safety.  And keep in mind that to attain even this substandard amount of water, the Palestinian Authority has the piled on indignity of being forced to buy desalinated water from Israel. So, not only is the fresh water of the West Bank siphoned off at the whim of Israel, Israel profits from selling desalinated water to Palestine. And adding insult to injury, water flows freely to the ½ million or so illegal Israeli settlers of West Bank who consume about 600 liters per day and freely water their lawns and fill their swimming pools.

I stated my wish that every American could spend time in Palestine to witness first hand their culture and the difficulty of life under occupation. I would now add to that: and to experience first hand what it is like to not have enough water because your own water is being stolen from you.

So, that was one my travails, which I might add, I feel sheepish even calling a travail, because for me this is a very temporary situation, while for Palestinians, it is every day life. Moreover, things in Gaza are ever so much worse.

The other minor inconvenience was my long, and expensive trip back to Bethlehem from Hebron on Thursday which I had mentioned in my last blog post. Well, it turns out that there wasn’t an accident that caused the Serveese drivers to have to take a longer, more circuitous route. It was a lovelorn Israeli man who staged a fake kidnapping to impress his girlfriend.  http://972mag.com/israeli-fakes-own-kidnapping-palestinians-pay-the-price/105262/  This little prank could well have caused another onslaught in Gaza, as did the kidnapping of the three teenagers last summer.

“Israelis were enraged by Asraf’s “prank” [because the huge operation to catch the “perpetrator/s cost millions of shekels] yet somehow managed to ignore the army’s regular, violent response. Media outlets failed to report on the fact that thousands of people were put under collective punishment Thursday night, and how, once again, they were the victims of searches, checkpoints and arrests — because they are Palestinians. Because the ends justify the means. Because they are used to it. What difference does it make? And, let’s face it, they deserve it.”