Wednesday was my first day of work at the Hebron Rehabilitation Committee (HRC). It was a cold, rainy day, the first of this kind of weather I’ve experience in the Holy Land. I couldn’t see a lot during the drive from Bethlehem to Hebron because it was so foggy, but there was a certain ethereal beauty with the fog in the craggy hills.  I was greeted at the Service stop by a driver sent by HRC to take us into the old city. There were two other women in the car, one from EAPPI  https://www.eappi.org/en one of the several volunteer human rights monitoring organizations and another who is also working in the legal department at HRC. We were escorted into a meeting room in HRC’s beautifully, restored, old-city building.

There were a number of other EAPPI volunteers there with whom I received a brief greeting from the director, and then an orientation about HRC and its work. HRC’s primary objectives are:

You can read more about HRC here.

We were then given a tour through the old city by Sammy, the official go-to guy.  Sammy is from the Czech Republic and has been living in Hebron and working for HRC for nearly 7 years. The buildings that HRC has restored are beautiful. They truly capture charm of this ancient city. 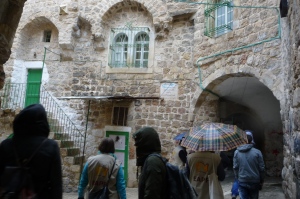 But as the tour progressed, we witnessed the mess that Israel’s apartheid system has made of Hebron. I knew about the sad situation of Hebron prior to my visit, but seeing things with your own eyes has a way of hitting you over your head. So we have a large city which has been almost exclusively Palestinian for over 800 years, it lies deeply with the green zone that was designated as Palestinian Territory by the UN after it was clear that the creation of the state of Israel in Palestine was never going to be accepted by the indigenous population; but because of some mythical ties dating more than 2,000 years ago, a group of radical Jews (many from the Bronx) have decided that it is their duty to reclaim Hebron, and for that matter the entire West Bank. This, not surprisingly, led to violence which led to Israel’s crackdown on Hebron and  and its Palestinian inhabitants. I will devote an entire post to the events that led to this outrageous crackdown.

It started small, as it did with most of the other illegal settlements in the West Bank; here with a group renting some hotel rooms during Seder and then refusing to leave. With various sources of funding from Zionist philanthropists and often fraudulent schemes, they managed to buy buildings in the old city and before you knew it, there were several hundred settlers. It would be one thing if they would simply deign to co-exist with the long-time residents, but these people came in with the objective of reclaiming the place and the Israeli army has supported them. The settlers in the old city now number between 400 and 1,000 and army personnel are by some estimates almost one to one.

The worst of it is, many of these settlers are incredibly hostile and violent and they can do virtually anything to a Palestinian, short of killing them with complete impunity. This next picture is in an area of Palestinian commerce bordered by a settler area.  The merchants have had to erect nets over the street to catch the debris and garbage that the settlers regularly lob down at them. Sammy told us that he was once drenched with a bucket of some woman’s dirty wash water.  It could have been worse – sometimes it’s human waste.

In the rare instance in which settler violence is prosecuted, the punishments are so minimal as to almost add insult to injury. When Palestinians complain to or seek help from an Israeli soldier because of harassment or violence from a settler, the response is almost uniformly, both tacitly and sometimes outright, “We are here to protect the settlers, not you.” And because of the violence, Palestinians are barred from Shuhada Street, the main street of the old city. This has had the effect of shutting down over 1,000 businesses and virtually destroying the economy.

There are ten check points in the old city to ensure the settlers that they won’t have to bear the indignity of encountering a Palestinian. The effect of this has been the closure of the busiest street of the old city and the resulting closure of 100s of shops.  Settlers are free to walk the street there as is virtually anyone else except a Palestinian.   Oh, when we were entering one of the checkpoints, the EAPII volunteers were not allowed in. The Israeli soldiers don’t like these types of because they have done an excellent job of documenting the ongoing abuses of both settlers and Israel security forces. 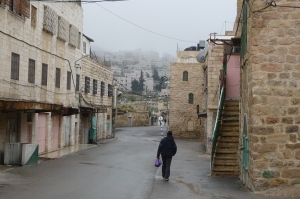 These two pictures are on Shuhada Street which you can see is virtually empty now.

There are about four Palestinian shops that remain open on Shuhada Street. No one knows exactly why they are allowed, but Sammy speculated that it was to deflect from the impression that the entire street had become a ghost town.

What about the Palestinians whose houses and shops face Shuhada Street? Their doors have been literally welded shut, some while the inhabitants were still inside. Some of the stalwart Palestinians who remain have constructed elaborate means of exiting through back windows, and erecting ladders to climb over roofs and get to the part of the old city in which they are allowed. As life has become unbearable for these Palestinans, many have abandoned their homes. Israeli law supposedly prohibits settlers from occupying them, but that hasn’t stopped them from trying.

Not only were the indigenous inhabitants banned from the main street of their city, many side streets are now blockaded because they traverse Shuhada Street. What this means is that in many cases, a route that would have been 100 meters or so now involves traversing a route of 4-5 kilometers.

More about the history of Hebron here, including a section talking about the remarkable strides HRC has made in restoring the old city.